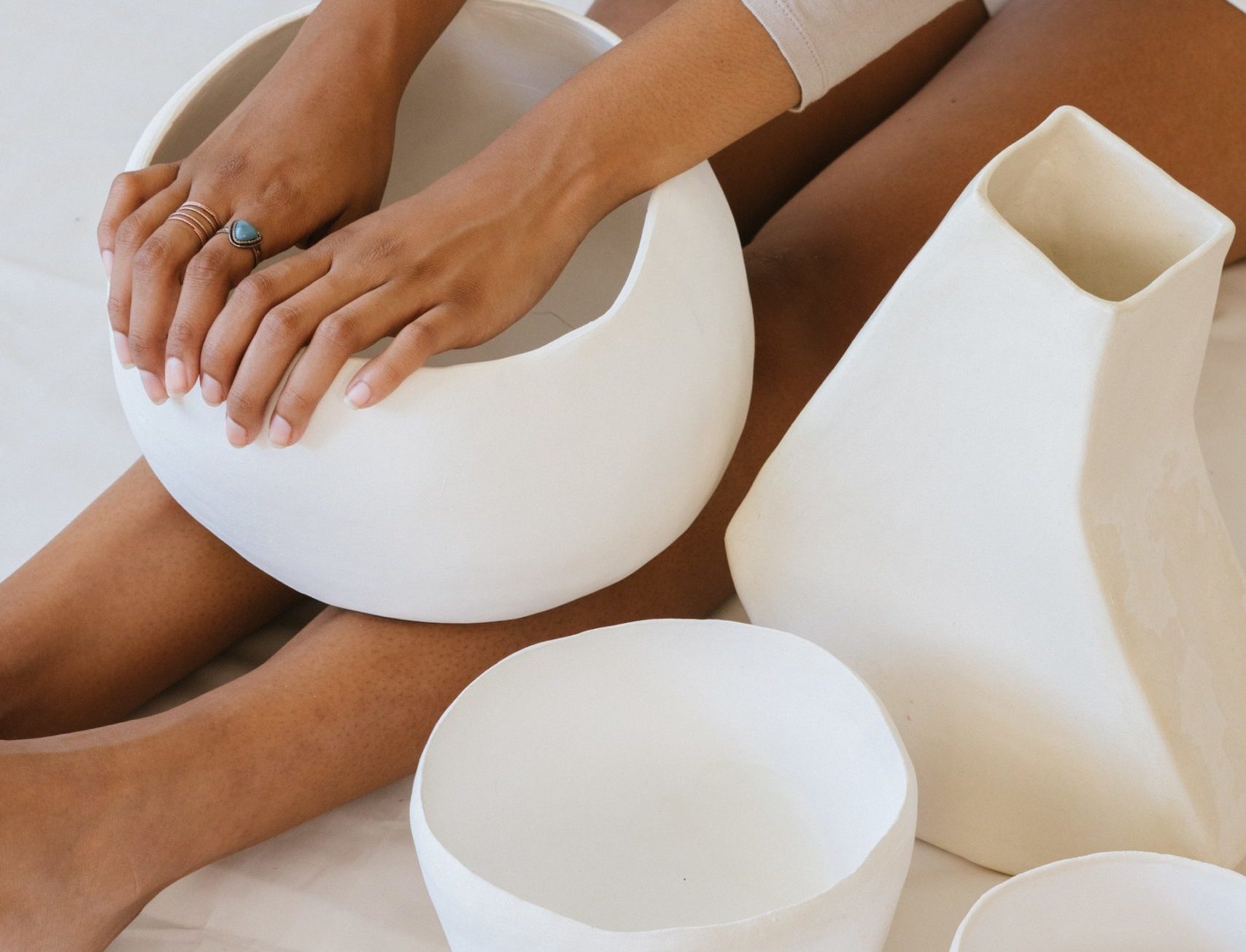 10 Aug What are the Main Types of Ceramics?

What is a ceramics are types of hard materials that undergo extreme heating of the materials in order to come up with the desired styles and designs. Humans have created ceramics that date back in 24,000 BC. This predates the application of metal. Advanced ceramics take account of the toughest and strongest known components. These advanced ceramics are usually used in the making of consumer products, construction, scientific and industrial equipment, cars or vehicles, and many others. Today the term ceramic has a broader meaning and takes account of various materials such as glass, cement systems, and advanced ceramics.  Here are some examples of ceramics.

‍What Are Some Examples or Types Of Ceramics?

‍ This is one of the many types of ceramics made by controlling the crystallization, which has properties the sameto glass with the ceramics’ toughness and strength.

Examples: These types’ ceramics are used to make parts in the making of cookware,bakeware, and cooktops. This material is also often applied to scientific and industrial equipment as well as medical devices.

‍Bricks are often made by heating minerals similar to clay, and sand is considered ceramics. This ceramic is common in homes.

Properties: The properties of this ceramic are extensively different based on their manufacture as well as composition. In general,  this ceramic is tough, brittle, heavy as wellas can survive higher temperatures.

Example Used: Some good use of this ceramic include chimneys, fireplaces,as well as walls. They are also often used in landscaping.

Silicon is also a popular type of ceramics and is often considered superior because of its chemical properties.  This Ceramic is very abundant as they make up about 90% of the Earth’s crust. Sand And clays, which are used to make common ceramics, are often based on silicon abide. Like for instance, the silica ceramic is used to create fired bricks,and the kaolinite material is used in making porcelains are silicate materials.

Properties of these types of Ceramics: This material has a brittle and hard crystalline solid as well as a semiconductor.

Example of Uses: Extreme purity crystalline silicon like polycrystalline silicon is used in the making of solar panels, and semiconductor devices such as integrated circuits. High quality silicon minerals are used to create ceramics, glass and are used as an aggregate in cement. They are considered the most common raw materials utilized in the field of construction.

‍Other types of ceramics are Silicon carbide, which is a high quality semiconductor material that has carbon and silicon that naturally occurs as the extremely rare mineral moissanite.

Properties: These types of ceramics are tough and extremely hard ceramic, as well as a semiconductor, which takes place in approximately 250 forms of crystalline. This ceramic is naturally colorless but frequently colored by impurities like iron. This shows low thermal development.

Example of Uses: This ceramic usually use in cutting tools, furnaces,brake disks, abrasives, heating elements as well as lighting, electrical power systems. The natural type of silicon carbide is prized as a jewel because it has the same appearance and hardness to diamonds. It is an artificial substitute that is harder compared to zirconia.

‍This is a heat resistance and extremely hard types of ceramic which has a black color.

Properties: The types of ceramics are heat resistance, extremely hard, as well as corrosion and wear-resistant.

This is a material manufactured with the same parts of carbon and tungsten, which is hard and dense.

How are Ceramics Classified?

Ceramics are classified as nonmetallic and inorganic components which are vital to daily living or lifestyle. Materials and ceramic engineers are those who style and design the processes wherein these products can be manufactured, make new kinds of ceramic products, and look for diverse applications for ceramic products in daily living.

Ceramic is everywhere. This type of material takes account of bricks, tile, toilets, glass as well as plates. This material can also be found in various products such as watches, snow skies, cars as well as phone lines. Ceramics are also be used on appliances like enamel coatings, shuttles, as well as airplanes like nose cones. It depends on the method of configuration; ceramics can be lightweight or dense. Usually, they will show superb toughness and strength properties.

On the other hand,  this ceramic is brittle in nature. Ceramics can also be made to serve as electrically conductive materials or insulators. There is also a type of ceramics like superconductors that show magnetic properties.

In general, ceramics are made by taking a combination of clay, powders, earthen elements as well as water and forming them into desired shapes. Once this material is formed or shaped, it is a fire in an extreme heat oven, also called kiln. Most of the time, ceramics are wrapped or coated in a waterproof, decorative, paint-like substance called glazes.

‍What Are the Four Types of Pottery?

‍There are four basic types of pottery, porcelain, stoneware, earthenware,and Bone China. Those four vary in accordance to the clay used to create them,as well as the heat required to fire them.

Earthenware are considered the longest established form of pottery, way back in the Stone Age. Even if the composition of this pottery can differ significantly, a usual composition of this is 25% ball clay, 32% quartz, 28% kaolin as well as 15% feldspar. Earthenware is considered the softest form of pottery, being fired at the lowest heat. It absorbs water, porous as well as scratched easily.

The classification of this kind of pottery takes account of all ancient pottery, terracotta objects, sixteenth century and later Chinese and Japanese pottery, and also pottery from Europe made up to the seventeenth century. In particular, it takes account of delft or faience in a tin-glazed type of earthenware. The best examples of fine art earthenware are Chinese clay warriors, also called the Terracotta Army.

To make it waterproof, they wrapped it in a glass-like liquid known as vitreous, and then they re-fired it in the kiln. Clay has iron that used for the making of earthenware that provides a shade that ranges from buff to cream, dark red, black, or grey, in accordance to the amount available as well as the oxygen content in the kiln during the process of firing. This type of pottery can be as thin as porcelain and less tough, strong, but more porous than stoneware. In general, this type of pottery is fired at high temperatures of 1000 to 1200 degree Celsius.

This type of pottery is dense and has a character that resembles stone after being heated; this is why it called stoneware. This pottery is impermeable or waterproof and normally opaque. In the natural condition, it is grey; however, it turns brown due to the firing process, and different colors might be then used in the type of glazes.

In general, this type of pottery is fired at high temperatures of 1000 to 1300 degrees Celsius. This is utilized in the making of commercial ware. On the other hand, it is also preferred by renowned artists in the making of fine art pottery. The first stoneware was made during the time of the Shang Dynasty in China. First, it appeared in Germany in the fifteenth century. Afterward, in the seventeenth century, a ceramicist in English first started making a salt-glazed type of stoneware. The development followed in the eighteenth century when the man called Josiah Wedgwood made black stoneware or basalts and the Jasperware or white stoneware.

The disparity between stoneware and porcelain is vague. Ceramists from china define porcelain as a pottery item that provides a ringing tone once tapped. On the other hand, in the west, porcelain is set apart from stoneware by its translucent feature once held to the light. Stoneware varies from porcelain as it opaque and usually just partially vitrified. It is fired at high temperatures.

China is the main origin of porcelain. It appears in the Han Dynasty, or perhaps later in the time of the Tang Dynasty, with the use of white china clay or kaolin and feldspathic rock or ground petuntse. Conversely, developments were done during the time of the Song Dynasty as well as the Yuan Dynasty and Ming Dynasty. 16-century ceramicists tried to remake its exceptional translucence by means of putting in glass to clay, making a form called soft porcelain. However, the formulation of the hard and true form of Chinese porcelain wasn’t discovered until in Germany, especially in Dresden and Meissen in the 1700s, when Ehrenfied Walter Von renowned ceramists and Johan Friedrich Bottger an alchemist started utilizing feldspathic rock rather than glass.

Porcelain is broken down into various classifications such as:

Hard-paste or also known as true porcelain: It has added mineral materials to the clay, normally mica. It is fired at high temp and results to tougher and harder objects.

Soft-paste: This is the least or low type of porcelain. This was discovered by European who fired at lower temps. It is regarded as a fragile or low type of porcelain. The best thing about it in spite of being low quality is that it does not require a fixed mineral to be made. Kaolin is combined with bone quartz, ash, soapstone as well as glass to yield this kind, with ball clay added into the mixture. It is also created under high temperatures.

This replaces true porcelain in today’s time. It is considered the toughest type of porcelain. It is also very resistant to chip damage. It has remarkable physical strength and normally generates a white and translucent result. It has bone ash, kaolin, phosphates as well as feldspar.

Later, ceramicists such as Josiah Spode tweaked the usual formula by putting in powdered bone ash to create bone china- a typical form of porcelain that is less prone to damage like chipping. What is more, it comes with an ivory-white appearance.

Still, Europe loved the German form of porcelain, while Bone China is common in the USA as well as Britain. The hue of porcelain clay that is not unfired can be something from cream to white, while bone china is clear or white. When done firing, they are both white and usually fired at a high temperature of 1200 – 1450 degrees Celsius, which is a bit higher compared to stoneware.

As mentioned, a ceramic is everywhere, playing a significant role into people’s daily living. A ceramic is utilized in various things like appliances, and choosing the right clay is the initial step in making a ceramic or pottery. Depending on the needs, starters must begin with stoneware or earthenware. Advanced potters can opt to all types of clay. This can be used to make pottery, while some use a combination of them to adjust plasticity. Do you have the skill in pottery, then you can use any clay in creating your masterpiece.